Snorting ketamine induces the effects faster than swallowing it. Different methods of ingestion have different speeds at which they reach the brain to exert effects, and snorting isn’t far behind smoking and injection in terms of how fast it gets the drug to the brain 3. Methods of ingestion that get the drug to the brain quicker are associated with higher risks of addiction development, so snorting is one of the riskier ways to take ketamine 3.

Snorting causes effects to arise more quickly than some other routes of administration 4. Snorting a drug facilitates its quick passage through the nasal mucosal membranes directly into the blood. Ketamine is able to relatively rapidly cross the blood-brain barrier as a result of the sharp rise in serum drug concentrations that snorting accomplishes. When a person snorts ketamine, they will experience a different rush than they would having swallowed it, which both adds to addiction potential and increases overdose risk.  Snorting ketamine delivers a heavy helping of fast-onset, dangerous drug effects. Additionally, this method of use can result in severe damage to the nasal passages

Ketamine users take this drug for its dissociative high. The ketamine high includes feelings of disconnection from the body, hallucinations, distortions in perception of vision and hearing, and in some instances, a sense of contact with a higher being 2. The desired euphoric effects are frequently accompanied, however, by a host of unpleasant side effects that can render the user heavily sedated or even unconscious.

When a user snorts ketamine—especially if it becomes a regular habit—their nasal passages and sinus cavities may become inflamed and damaged, which can lead to:

Like other anesthetics, it reduces the sensation of pain in the user 4. This means the user may become injured and remain completely unaware, not getting necessary treatment. Ketamine also has a disorienting effect on the user, and many serious injuries and fatalities involving the use of ketamine are due to accidents such as falls from tall heights. Another major risk with ketamine use is that while the user is high they are highly vulnerable to being victimized, as the state of sedation may render them unable to defend themselves and, later, unable to fully recount the details of the incident.

CAN SNORTING KETAMINE CAUSE AN OVERDOSE? 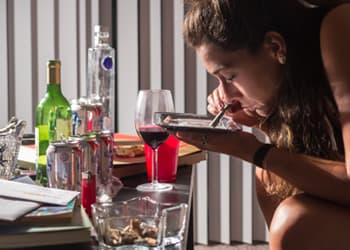 Ketamine overdose is not always lethal, but it can cause serious harm to the user, and snorting ketamine increases overdose risk. Because snorting the drug allows it to reach the brain faster, it can result in an intensified rush but also may overwhelm a number of brain-controlled physiological processes. During an overdose, the user is likely to fall unconscious and have very slow, shallow breathing 2.

In reported cases where ketamine use has resulted in deaths, it has generally been due to either accidents or because it was used together with another intoxicating substance, such as alcohol, opiates, cocaine, or amphetamine 1. Combining ketamine with other drugs can result in dangerous interactions and lead to a number of health complications—potentially causing extensive damage to the user’s body and brain. For example, using ketamine with other drugs that depress the central nervous system and slow breathing (e.g., alcohol) significantly raises the risk of overdose and death.

SIGNS THAT SOMEONE IS ADDICTED TO KETAMINE

Abuse of ketamine doesn’t necessarily mean a person is addicted; however, the inability to stop using ketamine in the face of negative consequences does indicate a problem that requires help. Relative to some other abused drugs, such as cocaine and heroin, it may not be associated with as high a risk for addiction development, but that does not mean that someone can’t get addicted to it. Ketamine users may find themselves escalating their doses to get the same effect as the first time they used it, as extended use can lead to the development of tolerance and dependence (key factors in the development of addiction) 5.

Addiction to ketamine can involve 6: